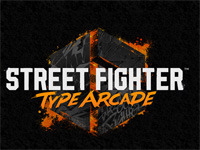 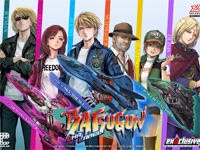 Batsugun, Toaplan last shump, is returning to the arcade in 2023 in a new version named Batsugun Exa Label. Batsugun was released in 1993 and is considered by many players as the origin of the 'bullet hell' genre. It was Toaplan last game as the company disbanded after its release. After that, some of the company members founded Cave. Junya Inoue (Key Visual) and Yoshitatsu Sakai (Sound) who worked on the original game are returning and Keishi Yonao works on the arranged soundtrack. Batsugun Exa Label is developed by Toaplan and exA-Arcadia TEAM EXA-AM1. It will be unveiled at JAEPO 2023 (February 10-11th). 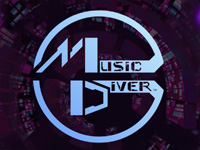 Taito releases MUSIC DIVER in many Round1 across Japan (full list in on the website) today. MUSIC DIVER is a musical game that uses 2 stick to hit two types of input areas: the screen device and the edge device that surrounds it. Each is divided into upper, lower, left and right and there are a total of 8 locations. During play, notes appear from the center of the screen according to the music and flow toward the outer circumference, so if you hit the input area specified when the judgment line is reached with the stick at the right time, the input will be successful. The music collection includes 50 songs, including big hit J-POP songs such as Running into the Night and New Era (ONE PIECE FILM RED), ani-songs, Touhou Project arranged songs as well as original songs. Each song has four different levels of difficulty: "EASY", "NORMAL", "HARD", and "EXTREAM". The songs are divided into 12 levels from 1 to 12. Additional tracks will be added every month after launch. The biggest feature of this game is the Create Dive/Sound Change mode. In this mode, you can freely arrange the notes of the song and create a musical score of your choice, and you can change the instrument that sounds when you hits it. The created musical score can be saved on the amusement IC card, and can be uploaded to the server and shared with other players. Also, special effects are generated for the changed sounds. In addition to the preset play sounds, you can also add new sounds by accumulating in-game points and purchasing them in the shop function. The Battle Dive mode allows two players (two machines and in-store communication) to compete for scores. The score display is hidden, creating a tense atmosphere where the result is not known until the very end. 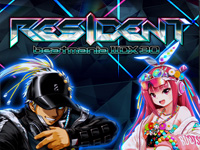 beatmania IIDX 30 RESIDENT started operation in Japan today. Konami chooses "DJ" as the main theme. For the first time in the series, the game supports full HD resolution, as well as a "Medal System" that allows you to earn unique medals by achieving various achievements. Each player becomes the main character (main DJ). In addition, this work also contains many popular J-POP songs in addition to newly written songs by domestic artists. You can watch beatmania IIDX 30 RESIDENT trailer. 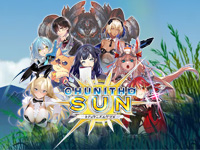 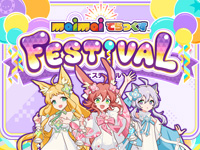 maimai deluxe FESTiVAL starts operation in Japan today. The number of songs recorded in maimai Deluxe FESTiVAL is over 1000 songs. To help players to find the perfect song there will be many music selection options: recommendation! Everyone's popular songs (pick up popular songs that are played by many players), recommendation! from your power (based on your Deluxe Rating, pick up favorite songs of players with similar ability),recommendation! from your selection (pick up songs that you might like based on the songs you've played recently). And the game introduces the "Random Select" function that automatically selects songs to play. Other changes are also available in the song selection screen, new sounds are added: break judgment sound, slide sound and tap success sound. A "quick retry" function has also been added that allows you to instantly retry from the beginning of the song by pressing and holding the 3, 4, 5, and 6 buttons while playing a song in Freedom Mode. 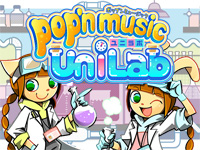 pop'n music UniLab is out in Japan today. The theme of this new episode of Konami rhythm game is laboratory. In this work, more than 20 songs including famous songs are newly recorded. In addition, some songs that were hidden in the previous work can now be played from the start of operation. More than 1700 songs can now be played. Furthermore, as a new option, LIFT that can change the position of the judgment line has been added, and a new sound effect has appeared GUIDE SE that sounds when the button is pressed. 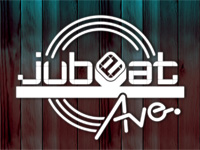 jubeat Ave. is released in Japan today. This is a major upgrade to Konami's game that adds many original songs performed by the usual artists as well as new artists. "Target score" is a new feature that allows the player to compare the difference between their score and the target score in real time. 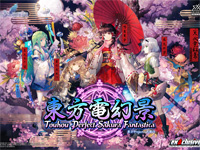 A new exA-Arcadia game starts operation in Japan today. This is Touhou Perfect Sakura Fantastica, the adaptation of Touhou Youyoumu - Perfect Cherry Blossom released on PC in 2003. It is the first game in the Touhou Project series to be released in arcades. The Touhou Project is a series of danmaku-style shmups featuring female characters with a highly developed storyline that is very popular in Japan. Created by Team Shanghai Alice, which has the particularity of being composed of only one person whose nickname is ZUN, the series began its adventure in 1996 with the first Touhou game released on PC. Beside the official games, there are many doujins and fan creations taking place in the Touhou universe. Touhou Perfect Sakura Fantastica features 4 playable characters: Reimu Hakurei, Marisa Kirisam, Youmu Konpaku and Sanae Kochiya and 8 bosses. Each of these 12 characters is voiced. The four main characters have different gameplay and stories. They all use the traditional shot and spell cards (bombs) as well as "barriers" that can be deployed by acquiring items and consuming gauges that build up as you get close to enemy fire. The barrier can be maintained for longer by grazing enemy bullets (the graze system), resulting in even higher scores. Firepower increases by grabbing power-ups and you can also collect cherrry points which can earn extra points but also grant temporary invulnerability. Compared to the PC version, the arcade version supports both vertical and horizontal monitors, adds a new playable character and new background music arranged by Mr. Keishi Yonao, the input delay is 2 frames where it is 6 in the PC version. Touhou Perfect Sakura Fantastica comes as a standard kit that includes the game cartridge, a poster, a header and decorations to dress up a Vewlix cabinet, Japanese/English instruction strips and manuals). An exclusive version is also available, which contains the content of the basic kit plus exA-Arcadia balltop and buttons, as well as a POP of one of the 4 main characters of your choice. And finally, a complete bundle with a blue system decorated with artwork from the game also exists. These kits will be available in Europe via Red Sun Systems from tomorrow. You can watch the trailer here. 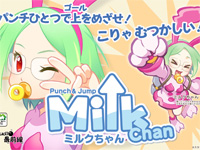 Studio Saizensen (Umihara Kawase) has just announced a new game that will be released late July on Sega ALL.Net P-ras MULTI Version 3. MilkChan is a 1P platform game where the heroine, Milk-chan, must deliver milk to the king at the highest floor of his castle. The gameplay is simple: you use your arm-punch to propel yourself through stages. You can punch the ground to launch yourself into the air and punch walls to jump diagonally. There are a lot of traps in stage and you have to be skikkful to reach to stages top. There are a time limit per stage and when you die, you instantly revive and can try again as long as there is time remaining. You can find extending time items throughout each stage. You will occasionally receive stamps as you progress through the game. You can place them anywhere you want by pressing the "Place Stamp" button. Other players can see your stamps, yYou can also attach comments on the stamps so you can give helpful hints to other players. To celebrate the release of the game, the first three players who finish the game will be awarded with a MilkChan Fastest Clear Trophy (with signature). To enter the competition, you have to use an Aime card or a compatible card. You can see MilkChan trailer here: .