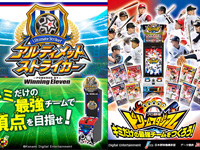 Konami releases two sports games for children today: Ma tama shÅbu! Professional Baseball Dream Stadium and Ultimate Stiker. Ma tama shÅbu! Professional Baseball Dream Stadium is a card game with a baseball theme. It is licensed by the "Japan Professional Baseball" association, so the real players are featured on the cards. The game uses a joystick and a button for a gameplay suitable to children. The player chooses a skill with the joystick and uses the button to launch the ball if he's the pitcher or hit the ball if he's the batter. Ultimate Stiker is a football game with cards that uses the Winning Eleven engine. Japan, Italy, Spain, Germany, Portugal and Brazil are represented on the cards. The game is a face to face battle with the opponent. The player can use one of the four strategies available by stopping a wheel on the one he wants to use.

Sega releases an update of Dengeki Bunko FIGHTING CLIMAX today. Four new character are added. Two of them (the girls) are playable: Taiga Aisaka from Toradora! and Miyuki Shiba de MahÅka KÅkÅ no RettÅsei (The Irregular at Magic High School). Each one comes with a support partner from her series: YÅ«ji Takasu from Toradora! and Tatsuya Shiba from MahÅka KÅkÅ no RettÅsei. Watch the presentation movie here. 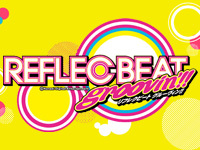 The fourth REFLEC BEAT game from Konami is available today. A new game mode named "Reflecting Dojo" was added. The players play a 3 songs course against the CPU. The songs are not fixed but the player has to choose them within a selection of songs fitting the course theme. There are two course types: Nintei Shiken (based on skills) and Kentei Shiken (based on a theme). There are also other new features: a "Refle" point system, a fourth difficulty level named "Special", "Vertical Objects" that are a new note type that, unlike other notes, don't bounce on the side and a new trophy system. Most of earlier reflec beat unlock songs are now unlocked by default and many new songs were added. A special game mode starring the game mascot Pastel is also to be discovered: Pastel Wonder Quest. 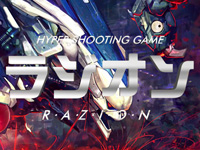 Razion is the next Neo-Geo MVS shoot'em up by NG:DEV.TEAM. The game is currently finished at 80% and the release is planned for Autumn 2014. This horizontal shoot'em up will feature 6 levels, 6 endbosses, 7 subbosses and 2 game modes (novice and normal). The score system is based on collecting gold cubes and using the beam. It's played using 2 buttons: A = SHOT (hold for focus/gold soak) and B = BEAM. Game size will be 1560 Mbits. Graphics are 16-bit CGI rendered sprites. The backgrounds will consist of stage long panoramas. Pre-orders are open: the regular edition costs €399 and the limited edition (99 units) costs €449. The limited edition includes an OST audio CD, a shockbox, 2 posters and a postcard. 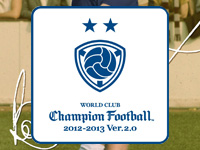 WORLD CLUB Champion Football 2012-2013 Ver.2.0 is available today. Some changes were made to the cards. Cards from the 4 "big" football countries (Argentina, Brazil, Italy and Spain) feature a new design. Sixteen players have been selected to appear in the "Superstars" category of rare cards. Japanese national team cards were re-designed as regular cards. A new class of rare cards was introduced: "Signed All Time Legends", they represent an ancient glory of football and are signed.

The World of Three Kingdoms Ver1.2 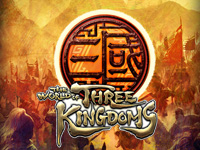 The World of Three Kingdoms Ver1.2 is available today. The game benefits of some improvements including the new "Friend" feature that allows players to invite friends to play with him. Cooperation between players is also improved with the new "messenger chat" system. Sega also worked on game content with new tactics and a new S rank. From 5 May, a new military commander will appear in a new scenario. "3KING.NET", a new service for smartphones is also launched today. It allows users to monitor the kingdom, status and ranking. Until May 31, players who register on 3KING.NET will receive a code to get the "dress-up daughter-in-law" set composed of several hairstyles, clothes and earrings. 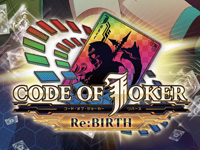 Code of Joker Ver1.2 - Re:BIRTH is out since yesterday. Sega hits a home run with this update since the game is now free! 100 new cards have been added. To attract new players, a new campaign allowing them to obtain rare cards was launched. The list of new cards is here. 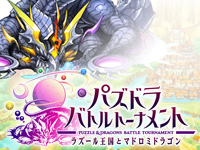 Puzzle & Dragons Battle Tournament is a joint project by GungHo Online Entertainment and Square Enix that is out today. At first, Puzzle & Dragon was a smartphones (iOS and Android) game very popular in Japan. The gameplay is the same as the smartphone version. The touch screen is divided into 2 parts: the upper part is a turn-bases RPG where the player fights dragons and other monsters. The lower part is a puzzle featuring gems. As its name suggests, the arcade version provides an online tournament mode up to 16 participants, other modes are available: story, in-store, custom and tutorial. The arcade version includes many monsters from the original game but also brings new ones. The game grid is increased to 5x8 and there is no time limit between game turns. The two heroes of the game Yo Minazuki Chika and Makimura are designed by Tetsuya Nomura (Final Fantasy, Kingdom Hearts, The World Ends with You). The game uses the NESiCA for backups (progression, avatar customisation, monsters evolution,...) and additional content. [Trailer] 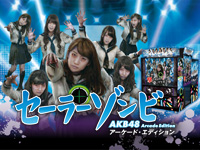 Bandai Namco releases its shooting game Sailor Zombie ~AKB48 Arcade Edition~ today. Developed by Nex Entertainment (Dark Escape 3D, Razing Storm, Music GunGun!, Music GunGun! 2, Time Crisis 3, Time Crisis 4 and Cobra The Arcade), it is played in a cabin featuring a large screen and a 5.1 sound system. Players fight alongside one of the following 7 members of the band: Yuko Oshima, Mayu Watanabe, Yuki Kashiwagi, Rina Kawaei, Anna Iriyama, Mako Kojima, Miki Nishino. They must inject an antidote to AKB48 members transformed into zombies and fight bosses. Furthermore, at random points in the story, they also have to play a rhythm game on four songs of the famous girls band including " Vichy Check" and "Flying Get". The faces of the members of AKB48 were scanned to produce 3D versions for zombies. Beside the game release, a drama Sailor Zombie is broadcast since April 18 on TV Tokyo. Nana Owada, Rina Kawaei, Juri Takahashi and Mion Mukaichi are the heroines of the series that tells the story of schoolgirls trying to survive in a post-apocalyptic world overrun by zombies. [Trailer]