Developers of the very average Aliens Extermination and the famous Big Buck series of hunting games, Play Mechanix has an extensive experience in shooting games. Knowing that its founder George Petro had directed the arcade adaptation of Terminator 2, it was logical that Play Mechanix took care of the Terminator Salvation game.

After Judgment Day...
In 2018 the war rages on between human resistance and the machines of Skynet. The player plays the role of John Connor through various missions that will lead to Skynet itself. The first mission is to find the underground laboratory where Skynet conducts experiments on humans while in the second, he must escort the refugees to a safehouse and then destroy Skynet. 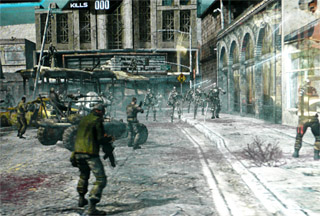 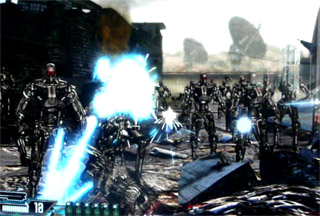 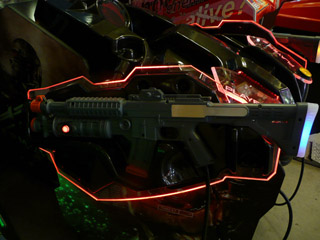 The Deluxe cabinet is impressive: it measures 2.67 meters high, is surmounted by a T-600 bust and features a 42'' LCD screen. It is also equipped with red neon and LED lights that flash during attract and when the player is hit and has a powerful 2.1 sound system. The guns are quite heavy and have a recoil effect despite a toy-like visual aspect (grey colour, orange ends). Too bad that some parts of the cabinet are made of cheap plastic. Two other cabinets also exist for this game: a standard 32'' version with mounted guns (like Midway's Terminator 2) and a super deluxe 100'' machine equipped with a projector and external speakers. 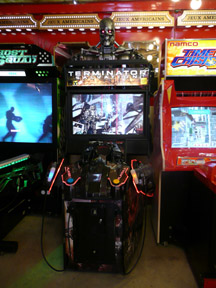 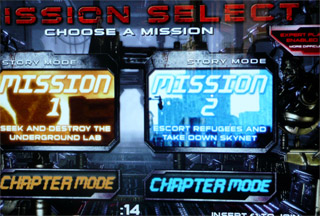 Once the game is started, the player can choose between several game modes: the Story mode divided into two missions themselves divided into 4 chapters each; Chapter mode where he can decide where to begin and the Expert mode (since version 1.20) which increases the difficulty of the game. The player is immersed in the action right from the start; just arrived, he sees one of his comrades getting killed by a Terminator who aim at the player just after. To survive, one must have good reflexes... because the Terminators arrive in numbers and fire is coming from all directions. But luckily, the player has 2 minutes of reprieve during which enemy shots do less damage (like Ghost Squad, there is a life bar that decreases with each hit). Player should spend these 120 seconds learning the game because after this time, it becomes hard even in normal mode (in expert mode, the player does not enjoy that ''grace period''). To overcome the machines sent by Skynet, you have to empty half a magazine on the robot. Shots in the head appear to be more efficient but do not expect to eliminate the enemy with a single bullet. Resistance use what they can: the player has a M4A1 fitted with a 60 bullets magazine. Other weapons are to be found on the battlefield: shotguns, miniguns, grenades (press the button on the front left side of the gun to use). These weapons can't be reloaded. In some situations it is possible to use heavy machine guns mounted on vehicles (helicopter, pickups, ...) in which case a sight appears on screen. Enemies about to attack are surrounded by a red halo, they must be eliminated first. During the game, the player is surrounded by teammates and sometimes civilians whom he should theoretically not shoot but if it unfortunately happens, don't panic, it seems to have no effect. As enemies go, there are plenty of them: T-600, modified T-600 (covered with rubber skin), T-7T (spiders), Aerostats, Mototerminators, Hunter-Killers, Spider-Mines (created specifically for the game), ... Once disarmed, the T-600 continue to attack you with his fists. Many other animations are triggered depending on the point of impact. Sometimes parts of the scenery are thrown at the player. The game is very linear, no alternative route is available and certain sequences are repeated until the player do what the games expect from him. Information presented at any time to the player are his life bar, remaining ammunitions and grenades, the weapon used and the number of victims. For cons, the score is displayed only at the end of each chapter alongside other player statistics (number of enemies killed, hit streak, accuracy) and rank: from rookie to elite. During a two-player game, player who earned the most points during the chapter is named winner. As of negative aspects, we regret the lack of alternate paths and any savegame system (which is somewhat counterbalanced by the fact the player can start at various points of the game thanks to the Chapter mode. 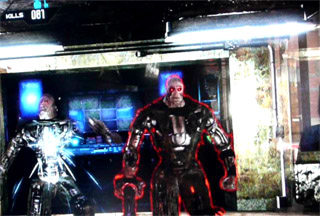 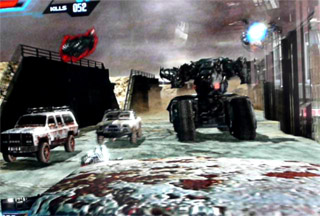 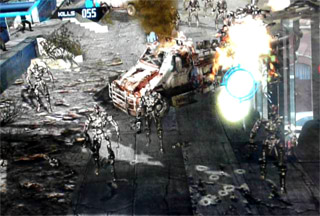 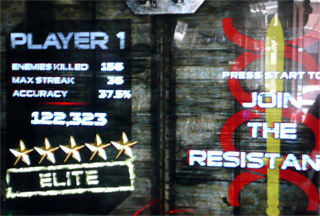 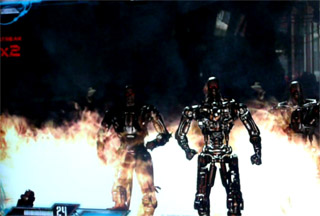 Atmosphere is one of the highlights of Terminator Salvation: the ambiance is oppressive, we directly dive into the war, shots are coming from all sides and machines are everywhere. The war is presented in a cinematic style: no downtime, explosions everywhere, very nervous sequences in vehicles,... Graphics also contributes to the success of the game mood: Terminator modeling is great, environment is detailed and deep, there is no aliasing (as opposed to Sega's Rambo), textures are neat and high resolution, light and particles effects are great looking and realistic. The physics engine is inconspicuous but effective: the scenery is interactive (destruction, impacts). The only bad point is the rendering of the water surface that could have been better. Despite the multitude of enemies on the screen, the 60fps animation is always fluid and there's no noticeable slowdown. Apart from the House of the Dead series, we can say that music in shooting games is particularly tasteless. Fortunately in the case of Terminator Salvation, the developers have had the good idea to use the famous Terminator theme replayed as well as original music suiting the action very well. Dubbing done with conviction also deserves to be mentioned, particularly the voice of John Connor. Sound effects are also very realistic, for example rendering of gunfire and explosions sounds vary in the water. 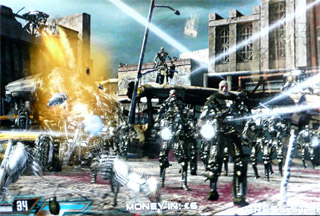 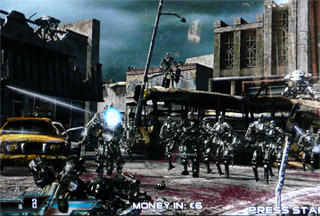 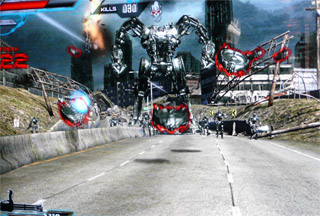 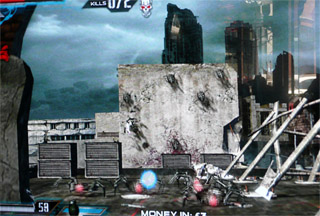 Conclusion
Terminator Salvation is one of the best shooters of the recent years. It has a neat realization from a graphical and sound perspective. The developers have managed to recreate the atmosphere of the film and immerse the player in this universe. The successful film-like presentation does however set a course which the player will never depart from. Pleasure to join the resistance and the desire to destroy Skynet and its machines pushes the player to go deeper into the game. 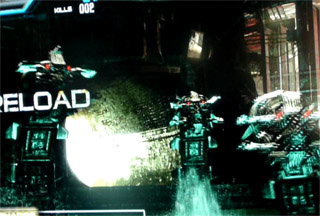 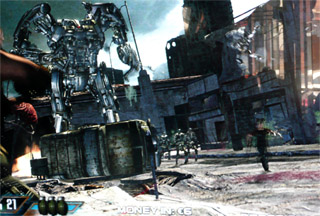 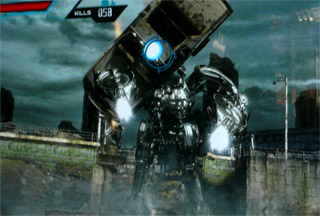 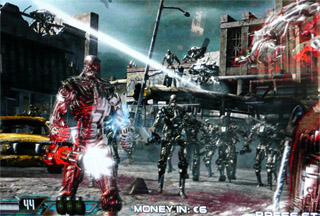 Text/Pictures: Sophie & Nomax.
Thanks to

Where to play?
More info...