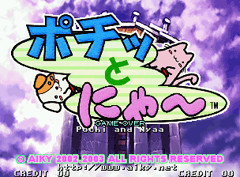 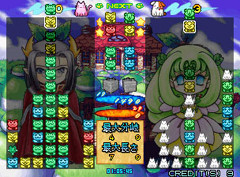 Previously released on Naomi, this puzzle game allows you to pile-up colored cats in a way similar to Columns except there, you decide when the blocks blow! The game supports one or two players simultaneous play making furious games. Graphics extreme cuteness will please girls and manga fans. Pochi & Nyaa is an original game that perfectly fills the gap there's in the puzzle games offer in Europe. Note the screenshots above come from a japanese machine but don't be afraid, the game sold there is in english!