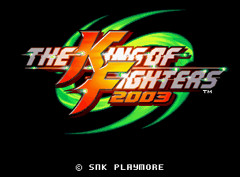 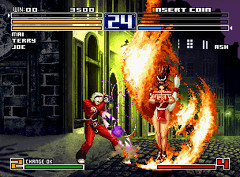 Since 1994, each year sees the release of a new "King of Fighters" game for the joy of its fans. This team-battle (3 on 3) fighting game gathers more than thirty characters, among these some comes from popular SNK series like Art of Fighting, Fatal Fury and Ikari Warriors. This edition features many innovations; the game is faster, you can change your character on-the-fly during the match (multi-shift), there's now a team-leader (which you choose) whose the only one to be able to perform a "very" special move (the "Super Special Leader Move) and at last, there're no rounds anymore! The match doesn't go to the next round as soon as a character is KO, it goes on until all 3 fighters of a team are down. The King of Fighters 2003 is the last "KOF" to be realesed on the Neo-Geo MVS platform. A series that gained from year to year a huge popularity among the players, that makes it a must-have especially at this price! The next episode, KOF NeoWave has just been released on Atomiswave hardware but priced at 750 €, the best is to wait for a price drop before getting it.