The Insert Coin 2009 event had a tall order to surmount it had promised to create a perfect environment for players to enjoy amusement gaming, in a casual atmosphere, with the opportunity for prizes and tournaments with a mixture of the latest releases, and past classic in all genres of game. But at the end of the two-day event the organizers were exhausted but happy with the knowledge that they had achieved what they had set out to do. 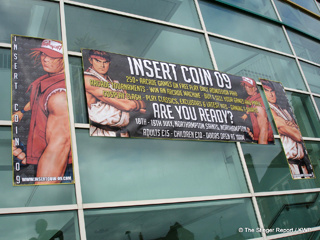 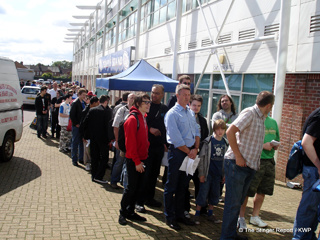 The Northampton Saints rugby grounds expansive exhibition area played host to over 200 video amusement machines the majority of which were the famous Candy style cabinet the sit-down cabinet of Japanese design much favored by the professional amusement player. An amazing hoard of machines that the majority of UK arcade operators would never consider installing Insert Coin's organizers defying skepticism and managed to gather not just the cabinets but the sought-after titles to populate them. 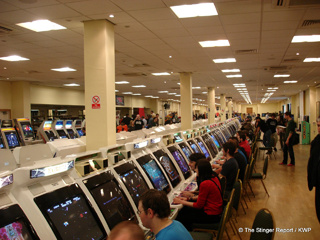 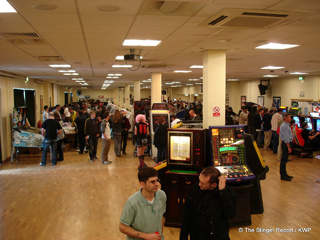 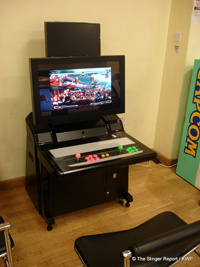 Along with the classic games, IC'09 managed to be a beacon towards the possible future of public-space gaming examples of the latest video amusement release from Japan were shown in the latest slim-line cabinets. Populating these cabs were UK débuts for fighting titles King of Fighter's XII, and BlazeBlue, while shoot-em-ups Death Smile and others were on show long before the amusement trade has seen the games in the UK. The rest of the hall filled to overflowing with unique Candy cabinets running a multitude of classic titles.

IC'09 broke the mound and established some records one of which was the operation of eight, connected Street Fighter IV machines in one venue, and organizing the largest prize tournament on the elusive, but highly popular Capcom title. The eventual winner (Shimma) beat off all comers, resulting in a nail biting and highly entertaining final to be crowed IC'09 Champion. The unique SFIV game was run on specially populated Atomiswave cabs and operated through exclusive networking hardware only ever seen to this point in Japan. Sadly Capcom UK missed-out on the opportunity to be involved in the event that gained such popularity amongst the fighting game fan site community that footage of the final was live-cast from the venue onto the internet. There are expected to be a considerable number of red-faces at the missed marketing opportunity -- interagency a sad factor shaping the amusement trade. 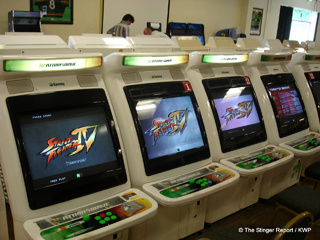 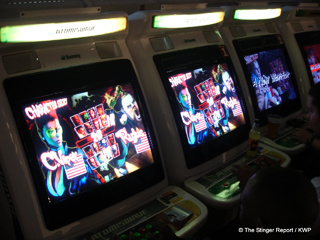 The element of tournament competition pervaded the whole of the IC'09 event with over nine tourn'ies ran over the two days and saw the popular formats competed over one of these organized by the team at Shmups. Building on the social atmosphere, Ready-Up organized a 'Cosplay Comicon' competition with competitors dressing up as their favorite manga and game characters, Tetra (Natasha) as The Angel in Crimson Armour from: Ninety Nine Nights winning the main prize. 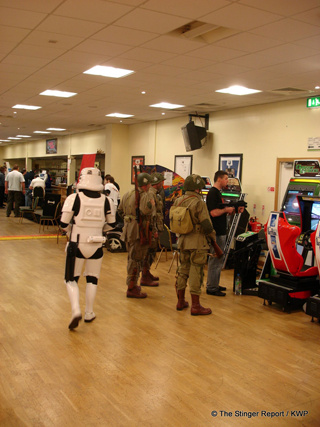 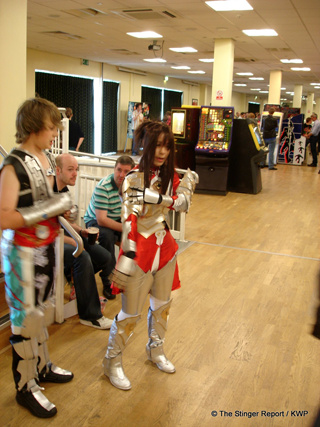 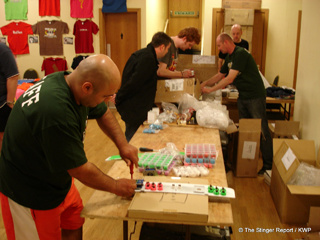 The Herculean effort of the organizer and their support team presented factory fresh games for all of the events attendees -- paying their £10 (Junior Single), £15 (Adult Single), and £23 (Adult Weekend ticket). The skill and hard work of the support team staff could be seen in only a handful of machines could not be coached into action on the day -- sadly one of those was the NamcoTekken 6 game, though avid local players ensured that the Tekken tournament went on using an alternate game in the series.

The event was not sit-down arcade cabinet dominated -- the event made space for a contingent of dance stage games machines. And in another aspect of the events schedule a Guinness World Record was successfully recorded by "Dancefreak" Kris Pearman who achieved an amazing highest score set on 'Stealth' mode on Dance Dance Revolution SuperNova 2. Stealth mode is effectively 'blindfold mode' insofar as there are no cues on screen as in normal play. IC'09 including a dancing stage arcade game arena where the best players took part in competition, overseen by DDR:UK. A number of dance stage games exhibited in the aptly named 'Heroes Bar' at the facility. 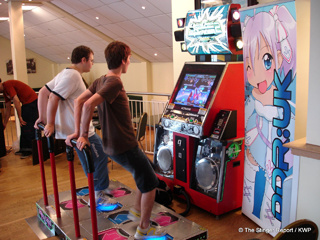 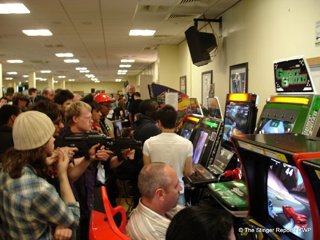 The party atmosphere was also supported at the event with a rare Capcom Minicute cabinet, along with Cyberlead and Astro City amusement cabinets raffled to lucky visitors that took part. The IC'09 event was not only hardcore gaming action -- the organizers had incorporated a retail aspect with booths selling a variety of coin-op associated items. 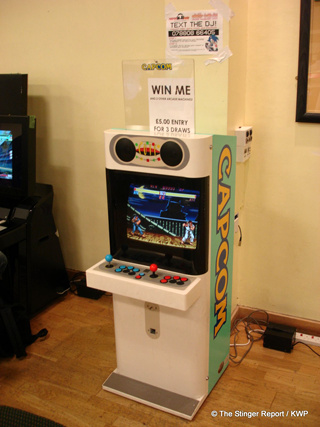 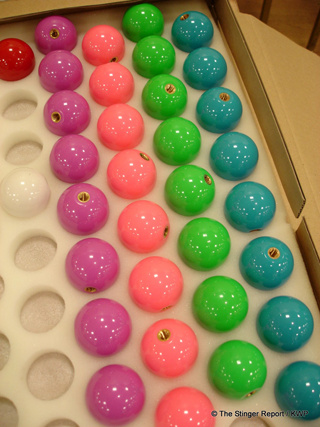 SegaShed had an impressive booth comprising boards, spares and marquees for all things Sega -- the company also showing an impressive upright cabinet project with The House of the Dead 4 sitting alongside Virtua Fighter 4 in one specially modified Lindbergh cabinet. 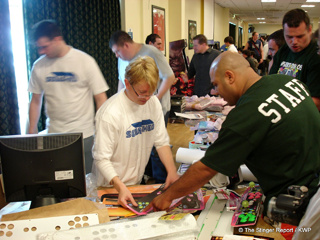 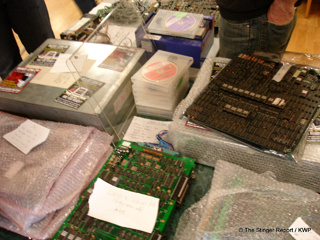 Aztec Coin Equipment brought a selection of titles for sale, ranging from the deluxe Lethal Enforcer 4 shooter to the latest bar gaming poker system with Heads-Up Challenge. For those attending there was a good selection of gaming merchandising with latest t-shirt designs from RetroGT and KaroshiDrop, the latter supplying the staff ware for the event. While music throughout was supplied from Radio Sega, taking text requests. 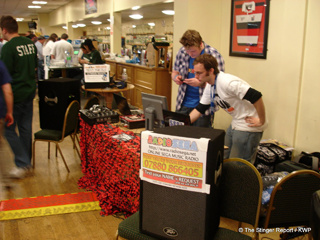 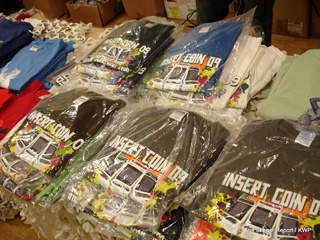 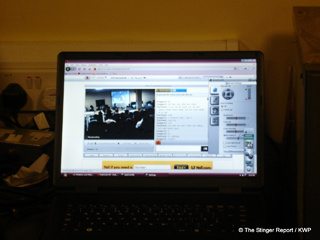 Marketing of the event had been heavy across the fan forums; along with the live feed covering the Street Fighter IV tournament, the events media partner KWP worked with visiting journalist and photographers and Tweeted live during the duration of the event; media coverage has been extremely popular.

This first event worked hard not only to gather all the components need to organize a show of this kind -- but also had to battle against amusement industry indifference towards supporting a show focused on the players rather than the trade. Attempts to write the show off before it had even started were proven wrong, and the organizers have already seen requests to book space at the event for next year! 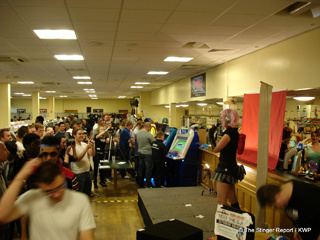 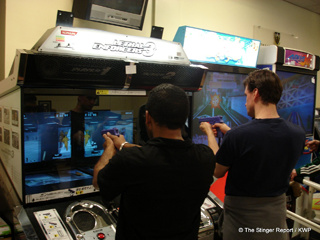 The two days were a mad-cap deluge of enthusiastic players of all ages. Obviously the first day was the most crowded, but the second day did not disappoint the organizers who felt vindicated by the massive turn-out. Proof not only of the interest in arranging the first of an event of this kind in the UK -- but the need for a bigger venue for the 2010 planned exhibition! 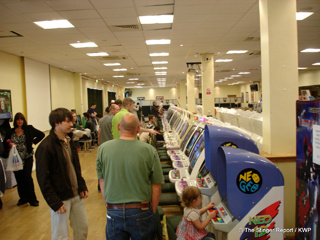 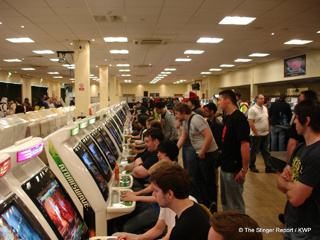 Kevin Williams is founder and director of the out-of-home leisure entertainment consultancy KWP Ltd. His extensive experience in global video amusements and high-tech attractions includes top management and design posts with a focus on new technology development and applications. He is a well-known speaker on the industry lecture circuit and has authored numerous articles. Williams is also editor and publisher of The Stinger Report, a leading industry e-newsletter and Web-based information service.